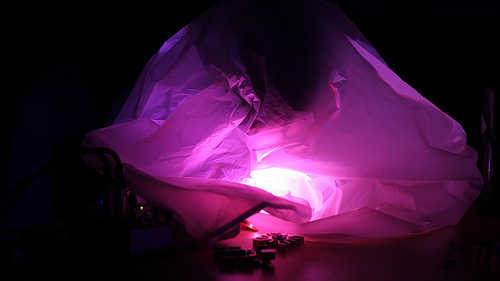 
Focus This can be difficult for many it takes some practice to be able to stay focused while in a trance state. Practice by focusing on someone you’d like to communicate with the next time you are practicing your relaxation techniques. Visualize this person, trying to project positive thoughts towards them. Next, visualize them receiving these thoughts. Keep focused on this until you feel that the person you’re thinking of has had time to receive these thoughts.

Now, stop focusing on them. This will break the link between your minds and feeling the communication break off, they will try to use their own telepathy to reestablish contact. The purpose of doing this practice while you are by yourself, is that once you try it on your partner (described next), your mind will know what to do, and you will have an easier time sending and receiving thoughts or feelings. Time for Practice with a Partner – Choose one person to be the receiver and one to be the sender. The sender should choose simple items to project. Choose items with clear, bright colors that are easily recognizable. The receiver should keep a writing utensil and paper close at hand so that they can write down any communications they receive from the sender. After the exercise, the sender and receiver should compare notes and evaluate their success.

It will take practice to get this ability sharp, so don’t get discouraged. With time, you’ll find your telepathic abilities becoming stronger.


ABSTRACT THOUGHT LEVELS Shapes and sizes are easy to communicate, however in the abstract concepts level mental telepathy moves one level ahead. This level involves communicating ideas and concepts without using the five senses and is quite a tough thing to do.

Telepaths seldom achieve this kind of an expertise and most trials do not have a high rate of success.

Some animals appear to communicate, and science is not able to explain how.

Telepathy shouldn’t be ruled out.

At this level, such animals would be using abstract concepts, albeit very basic concepts. Due to the nature of animal brains lacking prefrontal lobes, such ideas would probably not go beyond simplistic impulses like ‘hungry’, ‘thirsty’, ‘horny’, or ‘danger!’ There is a theory that humans may have used mental telepathy in ancient times, but once they developed language, they no longer needed to communicate in this manner. Humans should be able to re-discover this ability if that theory is true and it may just involve practice. Other scientists believe that psychic powers and mental telepathy can exist and become part of the human communication options, however, they feel future means of communication could involve use of mental telepathy for mankind rather than something that was used and discarded from the past.

Telepathy refers to a form of direct mind-to-mind communication between two people. Thoughts and feelings can be exchanged, using only the minds of the communicants. We all have some kind of telepathic ability on some level, but some of us have forgotten how to control it through our conscious minds. All of us experience times of this activity through our subconscious.

Just think about how it would be to have control of this special ability and actually utilize it to communicate. There are those that are skeptics when it comes to the subject of any kind of powers the mind can have, but think about this: how often have you felt on top of the world, and then you run into someone who is having a bad day. Just by talking to them for a bit, you begin to feel as depressed as they are. It is not necessarily what that person is talking about. They are actually transferring their negative feelings or emotions right to your subconscious mind. This is a type of telepathy. Scientific tests have proven that by accessing the center of your subconscious mind and also understanding how to concentrate your feelings and thoughts towards a given person, that you can arouse your long forgotten telepathic abilities. All forms of communication have to be learned; you weren’t born knowing how to speak your native language, it is something you learned by observing and imitating your family.

The only thing this means is that you haven’t yet learned how to tap into this ability.

The conventional wisdom in science is that human thought is ‘merely’ the result of a mass of biochemical neurons transferring electro-chemical impulses between different synapses-indeed; this has led some to conclude that consciousness is merely an ‘illusion’. But, there is that electrical current that gets generatedand as small as it is, it’s consistently and repeatedly measurable. Like all electrical currents, there is a proportional magnetic field that goes along with it. And the brain has tens of thousands of synapses activated at any given second.

So, now we are talking bio-electric and bio-magnetic fields-and we know very well that electrical and magnetic fields enable ‘mystical’ communications.

But, within these electrical and magnetic waves, is there content or mere static? Is it possible to be trained to control these waves? Does something like meditation actually operate by shaping thought waves into meaningful communication? Another problem could be the relative weakness of the brain’s electromagnetic field.

We have computers, cell phones, TV sets, stereos, and appliances all over the place today; and they all generate electromagnetic fields-stronger ones than the brain’s, meaning they might interfere with the brain’s transmission capacity. One question is whether it is possible to amplify these signals from our minds. It is already known that a spike in brainwave strength occurs when people are experiencing a state of heightened emotion; most commonly fear or pain.