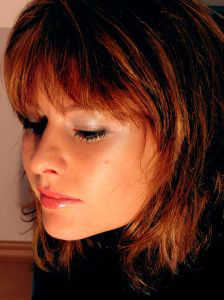 The thoughts of a human is a biochemical process. The process of nervous impulse being transferred from one neuron to another. This transfer of nervous impulses creates an electrical current – minute, but it can be measured.

This current generates a very small magnetic field where the brain has thousands of these synapses firing. When you have electromagnetic fields, you have the possibility of communications-as our modern technology clearly proves. But, this brings us to another question: in these ‘thought waves’, is there truly content being carried, or is it all just ‘white noise’? If there is content, can we be trained to control sending and receiving it? Is meditation so effective for so many because it’s a method of tuning in the thought waves better, cutting out the noise and static, just as we do when we tune in a radio station and/or move the radio antenna around? Another problem could be the relative weakness of the brain’s electromagnetic field. We have computers, cell phones, TV sets, stereos, and appliances all over the place today; and they all generate electromagnetic fields-stronger ones than the brain’s, meaning they might interfere with the brain’s transmission capacity. However, it seems that when a person experiences extremely intense emotions, the brain’s electromagnetic currents and fields spike momentarily. Could this be a way of boosting the brain’s transmission powers?


Practice telepathy by focusing on someone you want to communicate with the next time you are practicing your relaxation techniques. Imagine this individual, while trying to project positive thoughts towards them. Next, imagine them receiving these thoughts. Keep centered on this until you are convinced that the person you’re focusing on has had time to get these thoughts. Then stop focusing on them at all.

Stop the link so that they can know the communication being broken off; this should make them attempt to reestablish this connection.

Keep practicing and start telepathy training with a friend, this exercise should have prepared you properly for transmitting and getting telepathic communications. One partner will be the transmitter and the other person will act as the receiver in this practice. The sender should begin by transmitting simple thoughts such as bright colors.

Afterwards, sender and receiver compare notes to assess how successful the training has been. Don’t get discouraged; telepathy is an capability which takes practice, but you will improve over time.


You often see this amongst many religious organizations like Christianity and Islam that believe this is a tool used by Satan and is simply demonic power. These religions among us have come to have such power over society that a great many people have been taught to put no faith in telepathy, but only in ‘the Messiah’ or ‘the Savior’ or ‘the Prophet’ rather than in their own natural abilities. So why do the major religions refuse to accept that telepathy even exists? Our own opinion is that if others possess a power such as this, they can challenge the leaders of the church. Since no one wants to lose their power, they keep everyone suppressed about the matter. Granted, it’s not like this everyone, but when cases arise it’s usually the reason.

Scientists have a basic need to be able to explain any event.

Because of the elusive nature of telepathy, they do not believe it exists even though many people have had these experiences in their lives. Perhaps they have closed their minds to the concept entirely. It is hard to say as scientists do accept intuition which is a form of telepathy.

It may be because it has been rendering so far out of normal human existence that they can not open their minds to this event being an actuality. We present another question to these scientists. You cannot prove instincts and emotions yet because you believe you experience these, you believe in them.

Why is that? Is that not taking a prejudicial view? We all experience emotions, but whether they are legitimate or not is only know to that specific individual. The same can be said for instincts. Unfortunately, these are very common characteristics that we believe everyone to experience, including scientists. Are they jealous? Do they envy those individuals with these abilities and then use their position in society to try and make a mockery of something that they cannot do? Many believe that this is exactly what is going on in regards to telepathy as they simply write it off as a ‘happening’ or nothing more than a good instinct.


Just like so many other psychic based phenomenon, telepathy is a skill many of us possess to some degree we just have no understanding of how to use it! Telepathy refers to the ability to communicate with others through mind power instead of using verbal communication. During the telepathy how to process transference of thoughts, feelings, emotions, ideas, sensations, and even mental imagery occurs. Telepathy: How can you recognize it? It’s thought that many people (perhaps even most people) actually have the ability to be telepathic, but may not realize it. For example, “horse whisperers,” and other people who have very strong abilities to communicate with animals, actually communicate telepathically, and know what the animals are thinking. People, too, can practice telepathy with each other. For example, twins have a very close bond that often translates to telepathy. Have you ever seen twins “carry on” conversations without ever saying a word? It’s not entirely understood how they do this, but anyone with a very strong connection to another person can do just that as well. People who are very close to each other, like spouses, can sense when the other is in danger, in pain, or suffering, as just a few examples. This is telepathy, how can you develop this power?